It was a strange time in his life. He had been many things, experienced many things, perceived many things in as many ways, fought and lost many battles, won still others. But, never in all that time would he ever have used the term, stable. Young, handsome, energetic? Maybe, once. Bright, eager? Still, albeit tempered. Passionate? Sure, but with a more nuanced meaning. Confident? Perhaps, maybe…not sure. Focused? Well, let’s not get ahead of ourselves.

Stable is an odd word, one best used to describe a table or toilet seat sufficient to the task of supporting their respective burdens with certainty and ease. Give them your worst and what comes out bruised is ego, not the thing itself. They’re…trustworthy.

Trustworthy! Eeeww, how unsexy. He had hoped for a word more like solid or chill. Probably, the word that best illustrated his present life was rest. The overwhelming feelings of inadequate job performance, deadline anxiety, friendship uncertainties, identity questions, and fears of many kinds, including those of “right” doctrine or “biblical” theology (whatever that means) were all beginning to fade into the background.

The experimental days of project du jour held less fascination for him than previously. Instead, the growing appeal of quieter, simpler ventures held sway over the quickly passing days. He yet harbored dreams and aspirations, the hopes of any person with a heartbeat. However, they were rather less…insistent, less bothersome somehow, full of timeline-laden expectation and anxiety. 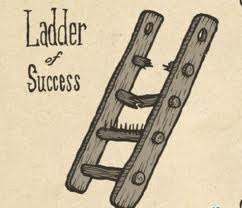 His trajectory fifteen years earlier had been one of skyrocketing up the ecclesiastical ladder of success (you better believe there’s such a thing). He had begun this upward career-clamoring by means of big, glittery, evangelical worship leadership. His growing bevy of names to drop, gloat-able experiences, and boast-able accomplishments all kept astride his equally rising ego…and the accompanying stress.

But there was a problem. His thirsty soul was getting in the way. When it appeared there was nowhere to go but up, his soul shouted Stop! in the name of love; let’s go down instead. It was barking louder every day, refusing to be ignored. A spiritual thirst had taken hold coupled with a theological crisis of epic proportions, denying the upward mobility to which his career seemed to be pointing.

In a few short years, he had gone from the music staff of a large, well-healed, hard to ignore big-box church in a wealthy, resort town to a much smaller, über-educated, College town church to a still smaller but diverse one stuck in a semi-arid, fruit growing valley in the middle of, quite literally, nowhere. Here there were no names to drop because people with “names” tended not to live there. Gone were the multiple monthly, high profile gigs that promised regional notoriety and decent pocket cash. Gone was the euphoric environment proffered by the diversity, youthful panache, ideological smorgasbord, and creative playground of a College town. Gone were the long, rainy days so conducive to his creative process and emotional make-up.

Taking its place was residence in a small city known more for its slow drivers, monster truck rallies, poverty, gang violence, county fair, and conservative politics. Where would such a man as he find kindred spirits in such a place? God’s faithfulness however, even in an environment seemingly hostile to his personal mode de vie seemed to emerge serendipitously as a fine dust collecting on the windshield of his spiritual bus.

In his ever-mutating thoughts on the matter one thing occurred to him as a central feature of his life over the past few years. He had learned to stop. If ever there was a singular gift to a healthy spiritual life it is Shabbat, Sabbath, holy pause.

The idea is beautifully mirrored in the fermata.

Looking a bit like a beady-eyed Cyclops with bad hair it is the musical symbol that, like the crossing guard, tells all ongoing traffic to pause indefinitely while other, more important matters, may be addressed. It holds things back, avoiding danger and confusion.

To pause suggests a willingness to stop indefinitely and count one’s steps. The days of our lives (no relation) hurtle through time and space at a frightful tempo. We are often blind to this fact (as was he) largely because we become hypnotized by how much momentum and power we pick up along the way. But, despite their apparent beauty and order, without sufficient space for pause, they begin to sound more like an unwieldy stampede of bucking, snorting notes headed for unseen cliffs of cacophony (think Lucille Ball after too much Scotch singing Schubert).

The fermata is the Sabbath of music. It shows up not as regularly but performs a similar function. In music, as in life, are surprise, delight, order, disorder and angst…beauty. As any composer will tell you however, music is made even more magnificent against the backdrop of its own silences. Rests are the music of silence. The fermata is the rest of exhalation. It holds things in place, defusing the potentially damaging effects of kinetic energy. Rather than something wonderful ending up a steam train careening over a cliff, the musical Sabbath of fermata puts the brakes on.

Sabbath secures us to the manuscript where the Composer’s grace and skill can adjust potential weak spots and lovingly dote on us. Our music can cool down, let off some steam, and regroup before beginning its forward movement again. Music is made more beautiful through its silences, its pauses. God makes us more beautiful in exactly the same way. As we pause long enough to take care of overused musical sentences, our emerging symphony is writ large across our life manuscript where all may experience its beauty.

He yearned to say that advancing age had brought the wisdom he craved. He’d had his moments. But ironically, some of his most egregious errors, lapses in judgment and felony mishaps had occurred smack dab in his late middle age. Chronos is never a guarantee of kairos.

Subsequent time and reflective pauses however had brought a sense of perspective that fanned out behind him like an ever-growing wake, revealing his course, in a sea more than half traveled. The music was slowly beginning to make sense.

These considerations allowed him pause (pun intended) to reflect on some of the reasons for his place in life. Although not without pain and challenge, the idea of stability no longer seemed so…tedious. No, it was a gift, a grace lovingly massaged into the music of his life.

Maybe it wasn’t such a strange time after all.

7 thoughts on “Reflections on faith and art – Stop in the Name of Love: Fermata’s Gift of Pause”